Some bikes that are built out of more than one motorcycle are given composite names from both marques that sound dead right and roll off the tongue like a lap dancer’s G-string. ‘Kawabusa’ is a made-up name for a made-up motorcycle that is right up there with ‘My round’, ‘I don’t have a headache tonight’ and ‘Both lines are for you’, for sounds that are pleasurable to the ear. Not unlike the war cry of a bunch of cartoon reptiles that had kids the world over demanding pet turtles (ninety-nine percent of which were flushed down the shitter as soon they got big enough to bite), it’s a word that almost demands an exclamation mark every time you write it, and an expressive shout to relay it orally. You could even add an expletive mid-word for greater effect without losing the ambience of the idiom, as in ‘Kawa-fuckin-busa’ … you'd probably need a bigger tank though.

Until the 1970s motorcycle racing in the USA was all about dirt track. On mile and half-mile ovals across America Triumphs, BSAs and Nortons competed against the homegrown Harleys. Despite it’s agricultural persona, dirt track racing, (also known as flat track), is a very precise form of motorcycle competition with the machinery having evolved over many years into the ideal weapon needed to cover a mile, or half-mile oval racetrack with a loose surface of clay, sand or dirt in the shortest possible time. The ability to control a bucking weaving motorcycle at speeds approaching 130 miles-per-hour, slipping sideways into a corner while ‘steering’ the rear wheel with the throttle, is an art learned on the dirt tracks that made American racers like Kenny Roberts, Eddie Lawson and Wayne Rainey into World Roadracing champions.

Hello Laura, how are you?
- Fine thanks, waiting for summer.

When did you hear about Bombers and Worldwide Bomber Magazine for the first time?
- Last year...facebook

What do you think about Bombers?
- Ah, love it!! Thats my lifestyle!

A regular combatant at the Elvington Speed Wheelie Event, where riders with balls the size of footballs balance bikes on the rear wheel over a full kilometre at speeds most sport bike owners will never see in their lifetimes, (such as the record-breaking 181.5 mph wheelie by mad Irishman, Shane Egan, last August), after scoring a 148mph wheelie in 2007 on a stock Hayabusa, Dom the Phantom fancied trying to shit himself on something a bit different in 2010. Most of the mono-wheeling fools favour the latest incarnation of Suzuki’s GSX-R1000, and after breaking four ribs and wrecking his K5 1000 Gixer earlier in the year when he T-boned a myopic driver U-turning his company car while talkin’ on his cell and eating a burger, Dom didn’t have much of a choice.

At the 2008 Bomber Weekend - the Finnish streetfighter and stuntrider festival - Isto Ikonen was asked to ride his friend's moped at drag race. The original rider had to cancel, since there was some domestic issues concerning safety of this particular contest. If that all sounds a bit lame, you need to know that the moped in question was a bit extraordinary… It was a small wheeled Solifer-Suzuki R50, fitted with a Yamaha 1000cc 4-cylinder engine. Isto had no nagging vixens at home, so off he went. His 1/8 mile time was a rather poor 14.43, with only a 89mph top speed, due to the extremely short gear ratio. But the idea of a better crazy-ass drag race moped was instantly set into Isto’s mind. 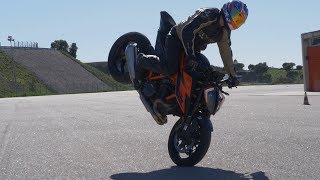 Do you wish to submit an article, to be published here on worldwidebombermagazine.com?

If so, please register. If you already have an account, login to start submitting your article.